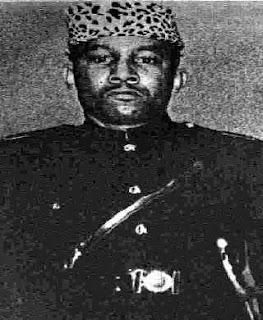 Carlos A. Cooks -
The Ideological Son of Marcus Mosiah Garvey

A True Blackman
by Robert Acemendeces Harris
If, as the new saying goes, "truth is [really] on its way" then, perhaps, Black People can finally also be back on their way. Which way? The way out of all of the confusion, contradictions and cultural degeneration that has retarded the liberation of our people these last few years.

Truth is not an abstract, it refers to sincerity, honesty, conformity to fact, correctness, exactitude, et cetera. Carlos Cooks was truth personified. It is also the truth that, if one man can be singled out as, the individual personality, most responsible for the resurrection on Marcus Garvey's philosophy and program then that man is Carlos Cooks.

Carlos Cooks was to Black Nationalism what John Coltrane was to the so-called avant-grade "jazz", and what Aretha is to soul music; the prime progenitor among their respective peers.

The main difference was the fact that during his life time, Cooks never receive his proper recognition. This was mainly because he was denied national coverage -- by white and "Black" press -- and was bound by an oath (the sacri) not to seek publicity for himself.
But since programs are often personified within certain individuals, and either live beyond or die along with their respective advocates, AJASS believes that -- if we are really going to re-establish truth in our Liberation Struggle, then more of our people should know about the relevance of Carlos Cooks.

Carlos A. Cooks was born on June 23, 1913 in the Dominican Republic and died May 5th, 1966 in Harlem. During his 52 years on this planet, he passed through a phenomenal experience by spending his entire lifetime dedicated to the liberation of Africa, its universal communities, and all its peoples. This fact alone puts him among the ranks of the Hon. Marcus Garvey and the grand patriarch of the, movement, Hon. Edward Wilmot Blyden.

It was Carlos Cooks who administered the Advance Division of the UNIA after Garvey's deportation. He fought psychologically and physically -- to uplift Mr. Garvey's name from the gutters of ghetto minds. Brother Frank Rockwood of the Harlem UNIA branch can attest to this truth.

It was Carlos Cooks who coined the phrase "BUY BLACK" as an economic solvency in the various African Communities throughout America. Attorney Cora Walker, who successfully engineered the Harlem Co-op market can vouch for that.

It was Carlos Cooks whom the late Malcolm X told many of us, that: "I respect Mr. Cooks because he is real Garveyite, a true Black Nationalist!" Since truth is supposed to be the only way, ask Sister Betty Shabazz about this.

It was Carlos Cooks who kept Garvey's UNIA Red, Black, and Green tricolors displayed daily and nightly. Go on over to the African Market at 125th Street near Lenox Avenue, ask for Brother Frank Jones 'cause he can tell you about it.

It was Carlos Cooks who maintained an African Nationalist Legion, mentally prepared and physically ready to join the African Liberation struggle. I don't know if the rest of the officials of the Republic of New Africa know this, but I'm sure that Brother Herman Ferguson does.

It was Cooks who continuously advocated armed retaliation against the cracker beasts who viciously murdered our Brothers and Sisters in the South. Truth is supposed to be on its way, so ask Brother Robert Williams.

It was Carlos Cooks who designated August 17th -- the birthday of Marcus Garvey -- as the first Black holiday, official or unofficial. And if you ask James Lawson (privately), the Brother will probably tell you the truth, too.

It was Carlos Cooks who first perfected an oratorical art of street speaking from his step-ladder, all over Harlem, but, especially on 125th Street and 7th Avenue. Brother Ed. "Porkchop" Davis and Brother Charles Kenyatta can verify that as the truth.

It was Carlos Cooks who first formed an independent school, complete with a course in Kiswahili at a time (1954) when many of our people didn't even know where Africa was, never mind what Swahili was. Brother Al Vann, of the African-American Teachers Association, can educate you to the truth about this.

It was Carlos Cooks who first defined the difference between the terms Black and/or African as opposed to "Negro" and fought to have the latter word abrogated as a racial classification. You can even ask Richard Moore (author of The Word Negro And Its Evil Use) about this. Or you can read the documentation of this in "BLACK NATIONALISM: A Search For Identity In America" by Prof. E. U. Essien-Udom of the University of Ibadan, Nigeria. He printed some truth about this particular issue.

It was Carlos Cooks who organized the Universal African Relief to send tons of cloths and medical supplies to our struggling fellow Africans in South West Africa and Angola -- over ten year ago. Ask Brother Hage Geingob of SWAPO or any of the other Brothers representing the liberation forces in Namibia (Southwest Africa). Their case is based on truth.

It was Carlos Cooks who first initiated the concept of natural hair as an issue of racial pride through his ANPM's MISS NATURAL STANDARD OF BEAUTY CONTEST. But just about everyone who comes in contact with AJASS knows this because our programs are based on truth and, so, we always let everyone know just where we're coming from. (Don't bother to ask the folks running the "Miss America Beauty Contest.)
Posted by SENDMEYOURNEWS at 11:44 AM