Afrika Speaks with Alkebu-Lan 12/12/11 - Is the British Police Force Corrupt and Racist? 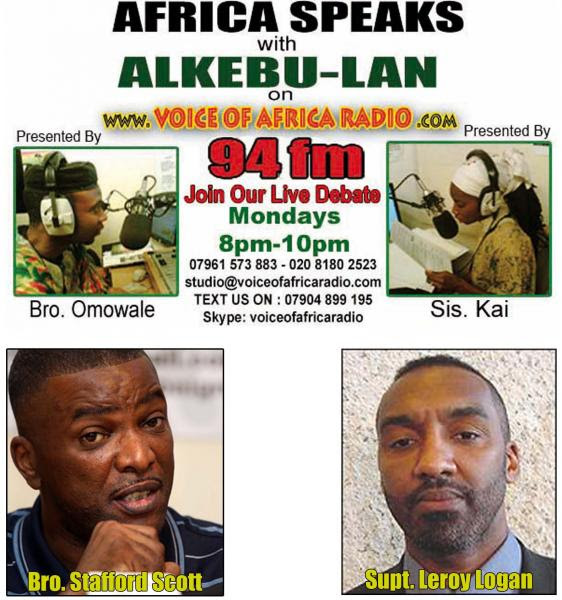 Our Special guests are: Stafford Scott, a consultant on racial equality and community engagement and an organiser with the Tottenham Defence Campaign.  He was also co-founder of the Broadwater Farm Defence Campaign in 1985 and recently stepped down from the  community panel monitoring the investigation into the death of Mark Duggan, who was killed by police in August. Superintendent  Leroy Logan MBE has been with the Metropolitan Police Service for over 28 years.  He is currently Olympic Policing Co-ordination Team and is a former Deputy Borough Commander of Hackney in London.  Supt. Logan is also a founder Member and Past Chair of both the National and London Black Police Associations and is currently on the Executive of the London association.  In 2007 he founded Reallity, a social enterprise that works towards building capacity and capability in young people through faith based mentoring, working in partnership with likemended statutory / non-stautory organisations and individuals.  A representative from the IPCC (invited)
Is the British Police Force

Afrika Speaks with Alkebu-Lan this week continues with an examination of  racism and corruption with the UK police force.  Listeners will recall that part one dealt extensively with the case of the wrongly imprisoned Cardiff 3 and the recent collapse of the £30m trial of 8 former South Wales police officers who undertook the original investigation and were charged with conspiracy to pervert the course of justice. The trial was halted, when it emerged that some key evidence was either “missing” or destroyed.  This event is only the latest episode of questionable practice that seems to run through the UK police service.  In fact, according to a 14/02/10 Guardian article by Sandra Laville “the Serious and Organised Crime Agency (SOCA)is assessing the scale of corruption within the British police after concerns were raised by senior internal investigators.”

If the SOCA assessment is ongoing it will presumably include the suspension in Mosiah (Aug) of Cleveland Police's chief constable Sean Price and his deputy Derek Bonnard as a result of their arrest pending an investigation into allegations of fraud and corruption in the service.  The same investigation also prompted the resignation of the Chairman of the Cleveland Police Authority, Cllr Dave McLuckie.

To illustrate the fact that that corruption is not limited to the provinces, the biggest recent casualties were the UK’s top policeman, Metropolitan Police Service (MPS) commissioner Sir Paul Stephenson and Assistant Commissioner John Yates who both resigned in July in the wake of the ongoing press/phone hacking scandal and the questionable relationship they had with senior officers the News International group.  In spite of Stephenson’s declaration that: “I and the people who know me know that my integrity is completely intact.” He was unable to whether the storm caused by his association with Neil Wallis, former deputy editor of the now defunct News of the World (NOTW), later hired as a PR consultant for the MPS, who was arrested as part of the new investigation into phone hacking.  For his part, Yates became increasingly under fire for overseeing a woefully inadequate 2009 review into the original 2006 phone hacking investigation in which he suggested that no further action be taken as well as his failure to take adequate action against officers who were known to have illegally accepted bribes.  One victim of the NOTW hacking, former Army intelligence officer Ian Hurst was damning of the MPS: “Fundamentally, what lays behind this whole cesspit - not since 2006, it predates it by many years before that - we're dealing with institutionalised corruption. It's endemic within the Metropolitan police and that has to be dealt with."

A few weeks after Stephenson’s resignation Bro. Mark Duggan was shot and killed by police marksmen.  Not untypically in cases of Afrikans dying at the hands of the police, a campaign of misinformation ensued (aided and abetted by a willing media and assisted in the early stages by the Independent Police Complaints Authority - IPCC) that characterised Duggan as a notorious gangster who engaged the police in a gun battle.  The reality is that Duggan had no previous convictions, the only shots fired were police shots and no forensic evidence has been that he was carrying a gun.

The IPCC facilitated a community panel to monitor the investigation into the killing but has this been rocked by the recent resignations of two of the three panel members -  Stafford Scott, organiser of the Tottenham Defence Campaign, and John Noblemunn, chairman of Haringey Black Independent Advisory Group.  Scott and Noblemunn quit over their assertion that the taxi that Bro. Duggan was travelling in before he was shot was removed from the scene and returned before investigators arrived.   But IPCC chairman  Len Jackson rejected these  claims as “inaccurate, misleading and more importantly, irresponsible” and risk “undermining the integrity of public confidence” into the investigation.

However , “Integrity” and “confidence” may not be notions the Emmanuels, still grieving from the March death family member David (aka Smiley Culture), would align to the IPCC in the wake of their investigation into his death.  The IPCC regarded the four officers at the scene when the 1980s music star allegedly stabbed himself through the heart during a police raid, as witnesses rather than suspects and thus were never formally interviewed.  Indeed, according to IPCC commissioner Mike Franklin, the investigation “found no evidence that a criminal offence may have been committed.  The investigation [also] found there were no individual failings which, for the purposes of the [Police (Conduct) Regulations 2008], amounted to misconduct,” even though the singer was handcuffed after the stabbing took place.  Merlin Emmanuel, the reggae star’s nephew, said his family has reacted to the IPCC findings with "anger, resentment and resilience" and accused the body of treating them with "contempt."  The family have also only been granted access to a summary the IPCC report, rather then the full report, on the instruction of the coroner.

Although Stephen Lawrence was murdered at the hands of a racist gang of young thugs, rather than MPS, there is a widespread perception that his killers are still at large because of its “institutional racism.” The current murder trial of two the mob, Gary Dobson, and David Norris is largely due to the emergence of new DNA evidence linking them to Stephen Lawrence.  But the possibility of a conviction being scuppered by the police again reared its head in late November.  Police forensic scientist Yvonne Turner admitted in court that she inadvertently labelled the clothing with the case number of an unrelated robbery, meaning some case records had been difficult to find for up to two years and stated: "I wasn't concentrating and I wasn't focused at the stage when I wrote the case number in."   She also confessed that the errors in her notes were "very irregular."  This could be a costly admission given that the defence case is based on claims of contaminated evidence.

Even away from death and imprisonment, the Afrikan community’s encounter with the police has historically been characterised by racism - from Notting Hill in 1958 (or even 1976), Brixton 1981 to the present.  Yet it wasn’t until the publication of the McPherson Report of the Stephen Lawrence Inquiry in 1999 that the host community had to confront the fact that the police were “institutionally racist.”  It was a situation that caused the MPS to claim that fear of being called racist subsequently hindered them from doing their job effectively.  However, the facts have never borne this out as the stop and search rates  of Afrikans, for example, have continued to increase even as the proportion of these stops leading to arrests has declined.

It could be argued that those best placed to assess the progress of the MPS in the area of race relations are those on the inside.  The Metropolitan Black Police Association is one such grouping and even they have had their challenges over the years that have caused them in the past to boycott MPS “ethnic minority” recruitment drives and which led the then Chair, Alfred John, to proclaim in February last year the force was still racist, “Without a doubt. There is no two ways about that.”  Since then a report commissioned by the Mayor of London into racism in the force has been published including 10 recommendations which, it asserts if implemented, if accepted and acted upon, “all officers and staff will benefit and that the MPS itself will become stronger and more effective.”  It is not clear the extent to which any of the recommendations have been accepted or implemented and if they were what impact it would have on the community.

So tonight we ask the question again:

Is the British Police Force
Corrupt and Racist? Part 2

Posted by SENDMEYOURNEWS at 9:12 AM