If you missed ProLibertad's Despierta Boricua Segment on Radio Libre at 3pm on WBAI 99.5 fm then check it out here:
March 25th Segment with Former Political Prisoner Carlos Alberto Torres

For The ProLibertad Freedom Campaign, April is FREEDOM MONTH!  A time to raise awareness about the work to free the Puerto Rican Political Prisoners and Puerto Rico's independence struggle!

FREEDOM MONTH is a time to organize activities; to begin writing to the political prisoners; to write poetry; to organize pickets and protests; to talk to your youth group, church, union or community about the political prisoners; and to put pressure on the President, our local elected officials, and human rights leaders to demand the freedom of the Puerto Rican Political Prisoners! 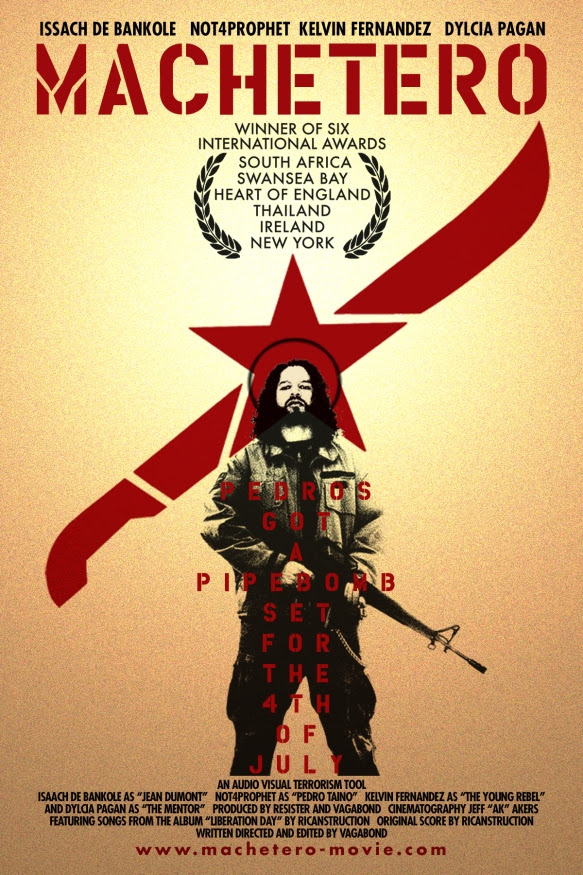 As part of ProLibertad's FREEDOM MONTH for the Puerto Rican Political Prisoners, we are screening the film, "MACHETERO" by artist/filmmaker Vagabond; who will join us for Q&A!  Join us for a night of film, discussion, letter writing, food and fun!

Suggested donation: $10 (NO ONE WILL BE TURNED AWAY FOR LACK OF FUNDS)

About MACHETERO: 98 minute film
MACHETERO is a meditation on violence as a means toward liberation. Post 9/11 definitions, ideas and notions of terrorism are challenged in this highly controversial and experimental film. Machetero is an allegorical narrative that follows French journalist Jean Dumont, played by Isaach de Bankolé (The Keeper, Ghost Dog, Manderlay, Casino Royale, The Limits Of Control), to a New York prison where he interviews Pedro Taino, a so-called "Puerto Rican Terrorist" played by Not4Prophet (lead singer of the Puerto Punk band RICANSTRUCTION). Pedro is a self-described Machetero fighting to free Puerto Rico from the yoke of United States colonialism. He is obsessed with freedom, freedom for his country, his people and for himself. Jean questions Pedro about his decisions to use violence as a means to achieve that freedom. Jean utilizes a global perspective in questioning Pedro, referencing examples of achieving his goals through more peaceful means.  However Jean soon finds that Pedro is well versed in liberation struggles from around the world and their debate over the use of violence as a catalyst for change escalates.

This Freedom Month event is dedicated to Puerto Rican Political Prisoner Avelino Gonzalez Claudio; check out his biography on the ProLibertad website

Posted by SENDMEYOURNEWS at 7:57 PM