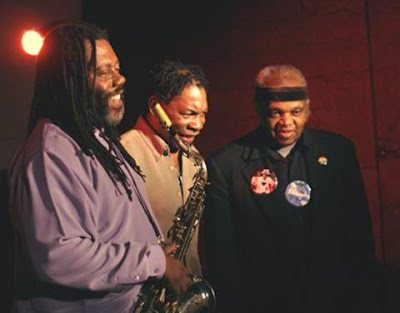 (L-R) Andrew Lamb, Newman Taylor Baker, Henry Grimes, photo by Pedro Corte Real
Wednesday, May 2nd, 2O12, 7:3O p.m. promptly, at Zurcher Studio,
33 Bleecker St. betw. Lafayette & Bowery (3rd Ave.)
one block above Houston St. and just opposite Mott St., Manhattan (NYC),
tickets $2O at the door ($15 for low-income persons, honor system),
212-777-O79O, http://www.galeriezurcher.com, studio@galeriezurcher.com.
The Lexington Ave. #6 train to Bleecker St. stops 1 block away,
or B/ D/ F/ V trains to Broadway-Lafayette stop 3 blocks away,
or the M1O3 bus to Bowery & East Houston St. stops 1 block away.
Map at http://www.galeriezurcher.com/contact.
* * * * *
This great trio has played nearly 3O concerts and given master classes in and around New York City, across the U.S., and in far-flung places from Berlin to Portugal to the Azores and the Middle East.
In the 195Os and '6Os, after receiving his music education at the Mastbaum School in Philadelphia and at the Juilliard School in New York City, HENRY GRIMES (upright bass, violin, poetry) played acoustic bass with many master jazz musicians of that era, including Albert Ayler, Don Cherry, Benny Goodman, Coleman Hawkins, Roy Haynes, Steve Lacy, Charles Mingus, Gerry Mulligan, Sunny Murray, Sonny Rollins, Pharoah Sanders, Archie Shepp, Cecil Taylor, and McCoy Tyner.  Sadly, a trip to the West Coast to work with Al Jarreau and Jon Hendricks went awry, leaving Henry in downtown Los Angeles at the end of the '6Os with a broken bass he couldn't pay to repair, so he sold it for a small sum and faded away from the music world.  Without a bass, a vehicle, or a telephone, he was truly lost.  But many years later, in 2OO2, he was discovered there by a Georgia social worker and fan and was given a bass by William Parker, and after only a few weeks of ferocious woodshedding, Henry emerged from his room to begin playing around Los Angeles, and made a triumphant return to New York City in 2OO3 to play in the Vision Festival.  Since then, Henry has played more than 47O concerts (including many festivals), touring throughout the U.S., Canada, Europe, the Middle East, and the Far East, playing and recording with many of this era's music heroes, such as Rashied Ali, Marshall Allen, Fred Anderson, Marilyn Crispell, Andrew Cyrille, Bill Dixon, Dave Douglas, Edward "Kidd" Jordan, Roscoe Mitchell, Louis Moholo, David Murray, Zim Ngqawana, William Parker, Marc Ribot, Wadada Leo Smith, and once again, Cecil Taylor.  Henry made his professional debut on a second instrument, the violin, at the age of 7O, has seen the publication of the first volume of his poetry, "Signs Along the Road," and creates illustrations to accompany his new recordings and publications.  He has received many honors in recent years, including four Meet the Composer grants, and has also held a number of recent residencies and offered workshops and master classes on major campuses including Berklee College of Music, Buffalo Academy, CalArts, Hamilton College of Performing Arts, Humber College, Mills College, New England Conservatory, Royal Conservatory (KASK) in Gent, Belgium, University of Gloucestershire, University of Michigan at Ann Arbor, and more.  He can be heard on 85 recordings, including a dozen recent ones, on various labels (Atlantic, Ayler Records, Blue Note, Columbia, ESP-Disk, ILK Music, Impulse!, JazzNewYork Productions, Pi Recordings, Porter Records, Prestige, Riverside, Verve, etc.).  Henry Grimes has been a permanent  resident of New York City since 2OO3.  <http://www.henrygrimes.com>, <grimestimes@earthlink.net> or <musicmargaret@gmail.com>.

ANDREW LAMB (saxophones, flutes) was born in Clinton, North Carolina and grew up in Chicago and in South Jamaica, Queens.  Having studied with AACM charter member Kalaparush Maurice McIntyre, Mr. Lamb came into the City's "avant-garde" community in the '7Os, becoming an active presence in the vibrant Bedford-Stuyvesant arts world at that time, and winning a Brooklyn Arts Council grant. In 1994, he got the chance to lead a session for Delmark; he composed all the pieces on "Portrait in the Mist," which featured a backing unit of vibraphonist Warren Smith, bassist Wilber Morris, and drummer Andrei Strobert.  Andrew Lamb has since recorded duets with Warren Smith ("Duet," WISland, '99, and "Dance of the Prophet"), made a trio recording with Eugene Cooper and Andrei Strobert (Kiki Records),  and in 2OO3 released "Pilgrimage" on CIMP with Tom Abbs and Andrei Strobert; his latest release, with his group The Moving Form, is "Year of the Endless Moment" (Engine Studios).  Andrew Lamb and his ensembles remain a regular presence in the New York area and have frequently played in the annual Vision Festival, which began in 1996.  Andrew has been a member of  Alan Silva's Sound Visions Orchestra, Cecil Taylor's big band, Henry Grimes's trio with Newman Taylor Baker, the Henry Grimes Quartet with Marshall Allen and Hamid Drake, and Henry Grimes's Spaceship on the Runway Quartet with Marshall Allen and Avreeayl Ra.  Always, Andrew Lamb's music rises out of the African-American jazz, blues and church traditions and is deeply spiritual, profoundly emotional, and readily accessible to all who hear him.  Wrote Steven Loewy for "All Music Guide," Andrew Lamb is "a serious musician seeking to uplift his soul through art, and, like John Coltrane and his progeny, Lamb's vehicle is the psalm-like expression of his tenor saxophone.  The results reflect his quest, testifying to his musical abilities, enormous potential, and depth of character."  Further information:  <http://andrewtheblacklambmusic1blogcom.blogspot.com>.

Virginia native NEWMAN TAYLOR BAKER (drum kit, washboard, percussion), termed "a ceaselessly resourceful percussionist" by "Village Voice" writer Nat Hentoff, has long worked to bridge traditional African talking drum and Western European tympani, creating a diatonically tuned enhanced drum set that allows him to develop original compositions in a broad range of musical expressions.  He began playing the drums as a small child, receiving his first drum at two years old.  He grew up on the campus of Virginia State University, where his mother taught English Literature and his father was head of the Chemistry Department.  As a young man he studied composition and percussion, receiving a B.S. degree in Music Education from Virginia State University and an M.M. from East Carolina University.  Newman has played and toured in over 4O countries worldwide with Billy  Bang, Kenny Barron, Bobby Bradford, Henry Grimes, Billy Harper, Eddie Henderson, Joe Henderson, Fred Hopkins and Diedre Murray, Ahmad Jamal, Leroy Jenkins, Jeanne Lee, James Moody, Dewey Redman, Sam Rivers, Henry Threadgill, McCoy Tyner, Reggie Workman, the Delaware and Richmond Symphonies, and more.  About Newman's drum artistry, journalist Rich Scheinin wrote, "Listen to the sparks, the effortless swing.  With a single 'ping' on a cymbal, he moves the music into a groove that's wide enough for a listener to lie down inside it."  And "satisfying, joyfully swinging, bewitching, meditative, luxurious," wrote Hank Shteamer in "Time Out New York."  Meanwhile, for 45 years, Newman has also been a dedicated educator, teaching in arts organizations, public and private schools, and music conservatories worldwide.  He is the recipient of a New York Foundation for the Arts Fellowship in composition for his project "Singin' Drums."  Most recently, playing washboard, Newman has joined The Ebony Hillbillies, one of the last black string bands in the U.S., keeping a history-soaked legacy alive. <http://ntbsingindrums.blogspot.com>, <http://www.ebonyhillbillies.com>.

* * * * *
"Henry Grimes plays the bass with absolute control, spinning tales without words, enriching the room with the depth of his bass. Newman Taylor Baker can capture any rhythm and will surprise you two or three times each show with how far he can take percussion. And Andrew Lamb works his saxophones and flute, paying close attention to the silence between the sounds, layering. Whenever you see this trio listed, be there!"  ~ Steven Psyllos, Editor-in-Chief, "New York Press," designating this the "Best Jazz Trio of the Year."
"Henry Grimes is a very special gift to this scene. He plays with so much dedication and gentleness in his music. The group with Andrew Lamb and Newman Taylor Baker under Henry's leadership is filled with freedom and zest and enthusiasm and great music. You really can hear the special voice of each musician. They give each other all the space and yet all the fullness of sound. It is wonderful to hear."  ~ Vision Festival (New York) producer Patricia Nicholson Parker.
* * * * *
Henry Grimes's Sublime Communication Trio, "Live at Edgefest," Ann Arbor, Michigan
is available on CD (JazzNewYork Productions, 2OO5) and may be purchased at the trio's concerts.
Trio photo as above available in high resolution for immediate download here:
<http://www.henrygrimes.com/Photos/SublimeCommunicationTrioByPedroCorteRealO7.jpg>.
* * * * *
Coming up next for Henry:  2 concerts and 2 master classes in eastern Canada in May!  Please stay tuned.
* * * * *
For bookings, interviews, CD's, further information, please contact
Margaret Davis Grimes,  <http://www.henrygrimes.com>,
<grimestimes@earthlink.net> or <musicmargaret@gmail.com>, 212-841-O899.
* * * * *

Posted by SENDMEYOURNEWS at 10:55 AM