The Malcolm X Commemoration Committee
with the OAAU & the Sons & Daughters of Afrika
observe the 87th Anniversary
of the BIRTH of our BELOVED
MALCOLM X!
on SATURDAY, MAY 19th, 2012
Join us for the Annual Pilgrimage to Malcolm's Gravesite! 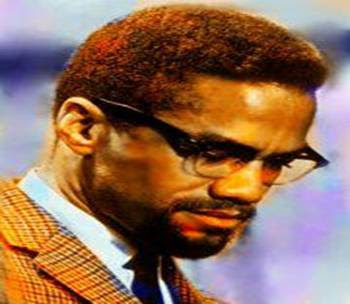 
The Annual Pilgrimage to Malcolm's gravesite was conceived by the late
Ella Little-Collins, Malcolm's sister. It has been observed every year since 1966.
The Malcolm X Commemoration Committee joined the Pilgrimage in 1993, and since
that time, has expanded community participation by more than double. In 2000, Baba James Small, who with the Sons & Daughters of Afrika has overseen almost every Pilgrimage since its inception, invited the New Black Panther Party to serve as the ceremony's 'Honor Guard'.


To download a flyer, click here!
FREE THE LAND!
Let's "Pick up the Work" to Educate, Agitate & Organize to Free our Political Prisoners &
Prisoners of War
Malcolm X Commemoration Committee
déqui kioni-sadiki & Mani Gilyard, co-chairs
"What you and I need to do is learn to forget our differences...We have a common oppressor,
a common exploiter, and a common discriminator.... once we all realize that we have
a common enemy, then we unite on the basis of what we have in common."
— Malcolm X  "Message to the Grass Roots"

Posted by SENDMEYOURNEWS at 10:15 AM