Human rights in the America's - Afro-Colombians: The Struggle for Self-determination

at Busboys and Poets

Afro-Colombians: The Struggle for Self-determination Amid Geo-economic Wars and Human Rights Violations 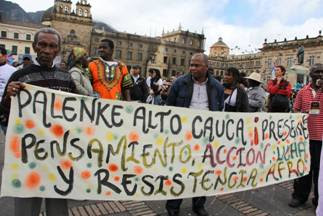 “If we are going to forge a 21st century movement for peace and justice, we must first understand the plight of our brethren around the world. The Cabral/Truth Circles are designed to educate and then motivate our community to take action against tyranny, racism, and all forms of war.”
--Nicole Lee
President, TransAfrica

Film: La Toma by Paola Mendoza. La Toma documents the struggle of an Afro-Colombian gold-mining community in southwestern Colombia to remain on its territory. Home to 1,052 families, La Toma was founded by runaway slaves in 1636. Over the centuries, they have developed a culture and history that is tied to this land, carving out environmentally sustainable livelihoods through artisanal gold mining and basic agricultural projects, and grounding their traditions in this ancestral place.

Despite a legal framework that protects the community’s rights to the land, multinational investors and right-wing paramilitaries have threatened, intimidated, and killed members of the community. Thanks to the strong organizational capacity and the community's will, in addition to transnational advocacy efforts that included PCN, WOLA, LAWG, and ACSN, the people of La Toma continue to live in the territory. However, private interests and armed militias continue to threaten La Toma in order to displace them and make way for large-scale mining operations.

For more information: 202.223.1960 ext. 137 or email mmunthali@transafrica.org.
The Cabral/Truth Circle is named in honor of Amilcar Cabral and Sojourner Truth. Amilcar Cabral was one of Africa's most successful and thoughtful leaders. He led the anti-colonialism movement in Cape Verde and Guinea-Bissau. Sojourner Truth petitioned the government and won back her five-year-old son who had been sold illegally. She spent the rest of her days traveling throughout the country encouraging the debate to end slavery and the creation of a peaceful society.
The venue is Busboys and Poets, one of the most exciting establishments in the Washington area. Busboys and Poets is a restaurant, bookstore and gathering place for people who believe that social justice and peace are attainable goals.Admission is free, but space is limited. We encourage you to have dinner with us and change the world.

Posted by SENDMEYOURNEWS at 10:19 PM