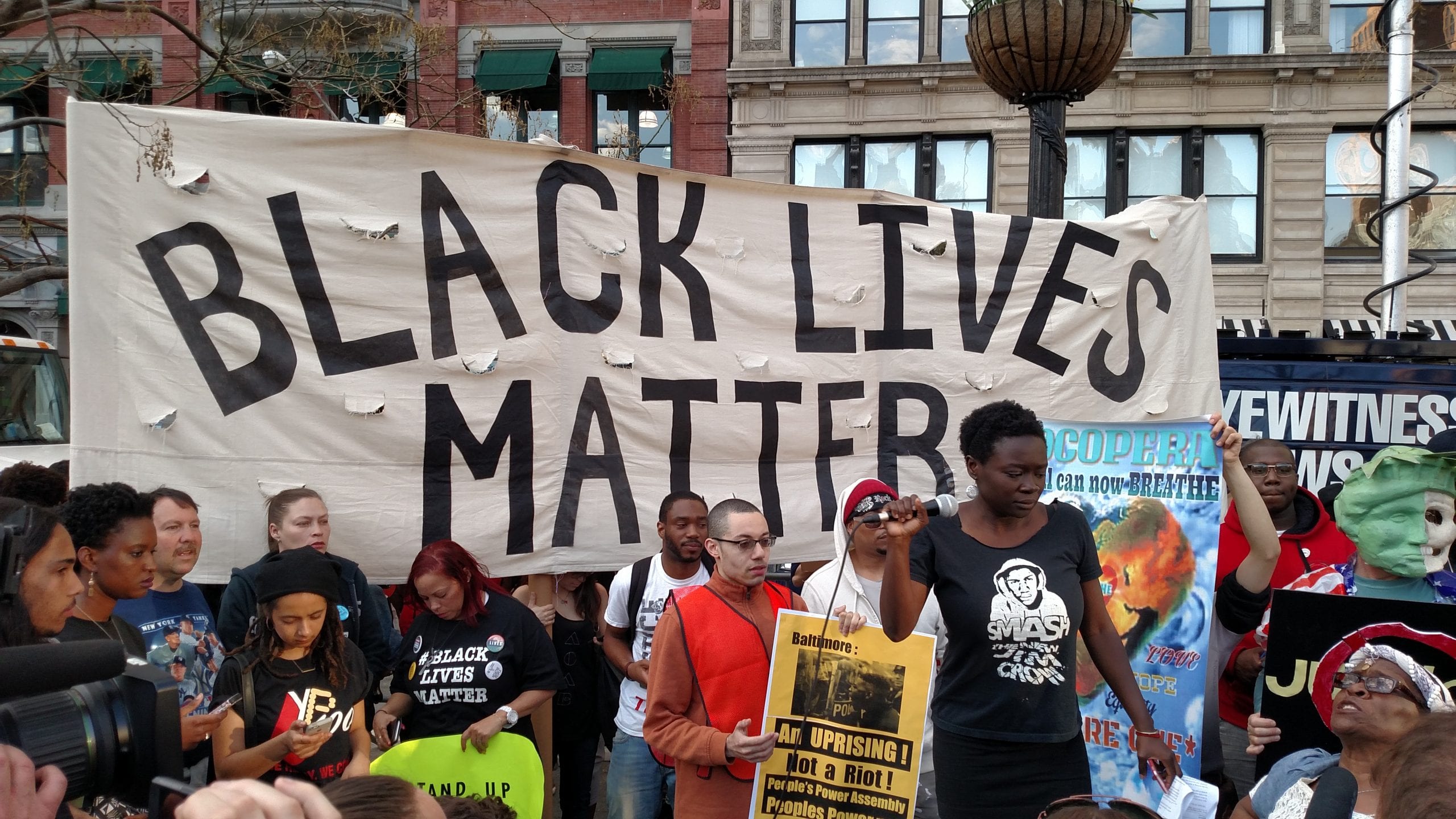 The atrocity of George Floyd's killing by police has stoked anger over systemic racism while also helping redraw geographic, demographic, and conceptual lines of antiracism advocacy.
Encompassing young and old, urban and rural, and a diversity of nationalities, religious orientations, sexual and gender identifications, and racial and ethnic backgrounds, the antiracism movement is being infused with new energy and perspectives.
Certainly, the enlargements of interracial and international antiracism alliances are a very welcome development, but the past few weeks have also witnessed expansions of intraracial solidarities between African Americans and African immigrant populations in the U.S.
Given African immigrants typically have not accorded racism the same social importance as U.S.-born blacks, the noticeable rallying of Africans in the U.S. around a "Black Lives Matter" call for justice in response to George Floyd's death represents a significant development.
Could new levels of political connection between African Americans and African immigrants be emerging that signal justice-oriented alliances capable of bridging diverse black vantage points on race?

In a study of racial and ethnic dimensions of black identity in the U.S., Haitian-American scholar, Patrick Oray points out that defining blackness within the U.S. has become a process of "ongoing negotiations among the growing diversity of black peoples residing in the U.S."1 Within those diverse trajectories of social construction, negotiations  between African immigrants and U.S.-born blacks have had their unique challenges.
Race has been baked into African American social life and consciousness—a legacy of the tragic and tortured history of America's genocidal racial history not always appreciated by persons not forged in that racial cauldron. Aspects of African American internalizations and externalizations of race are captured in recent Pew Research Center data on racial identification among Americans. The data show black adults more likely than persons from other groups within the U.S. "to see their race or ethnicity as central to their identity," with 74 percent of blacks indicating such identity markers were extremely important or very important, as opposed to 59 percent of Hispanics, 56 percent of Asians, and 15 percent of whites. Moreover, 81 percent of blacks surveyed said they feel very or somewhat connected to a broader black community in the U.S.  While some may feign colorblindness, often as a cover for social privilege, African Americans remain explicit about their racial framings.
A common perception has been that African immigrants in the U.S. have tended not to place so strong an emphasis on race, either in their personal or group identification, or in explanations for social challenges encountered within the U.S. Instead, according to scholarship by Katha Guenther et al, "black immigrants often strive to assert the primacy of ethnic identity over racial identity," both in "an effort to maintain ethnic group solidary and self-esteem, and to increase their chances of upward mobility."2
Scholars have also drawn attention to connections between black immigrant concerns with upward mobility and a reluctance to become associated with black political or cultural expressions that appear too racially explicit, confrontational, or outside the American social mainstream. As religion scholar, Jacob Olupona points out, African immigrants have often pursued identities separate from African Americans in the hopes of avoiding the racist treatment and constricted social prospects suffered by many U.S.-born blacks. The result, says Olupona, is both a dilemma and a tension for African immigrants, as they seek to ensure the best possible life for their families and the communities with which they most immediately identify while at a broader level being drawn by camaraderie or compulsion alongside African Americans in "a common goal of fighting racism."3
Moreover, African immigrants often bring with them a strong religiosity that has tended to emphasize a religious claim on private more than on public life, while according value to the public realm for its facilitation of the free practice of religion more than its facilitation of social justice or integrous governance. The lower priority on governmental facilitation of social goods is not surprising though within contexts where there may be lower overall confidence in the ability of government to deliver on these goods.
Recent Pew Research Center data are instructive on these points, providing revealing contrasts in the importance Africans assign to principles defining private vs. governmental life. For example, while 87 percent of survey respondents in Mozambique and 82 percent in Democratic Republic of Congo said religion is very important in their lives and only 2 percent in the former and 5 percent in the latter said it was not at all important,  a full 25 percent of respondents in the two countries stated it did not matter or that they had no opinion as to the form of government within their country.
Many Africans have looked to the U.S. as a beacon of good governance, both in its ability to preserve religious freedom and to make good on its democratic and social promises. African immigrants have tended to bring with them a view of America's favorability in these respects, and have found it difficult to align with critics who call into question these popular conceptions of American religious and political 'exceptionalism.' As Olupona points out, African immigrants have struggled with reconciling how the United States can be "both a Christian and a racist nation."4
Consequently, African immigrants have resisted more than embraced race-conscious critiques and strategies advanced by longstanding racial justice organizations such as the NAACP, and by more recent organizations such as Black Lives Matter (BLM) and Black Alliance for Just Immigration (BAJI).
That now may be changing, however, amidst a drumbeat of black death at the hands of police.

BAJI since 2006, and BLM since 2013, have been prominent organizational lightning rods recently on race within the U.S., sparking both insurgent action and public ire in their demands for justice. …African immigrants have been strategically engaged with BLM and BAJI since their organizational formations.
Before the BLM movement irrupted in 2013 in collective outrage over the acquittal of Trayvon Martin's killer and the racist law-and-order zealotry the case represented, a wave of younger-generation black civil disobedience in support of black immigration justice had already been sweeping across major U.S. cities via BAJI's organizing efforts. With the foreign-born black population in the U.S. currently numbering around four million (out of an overall U.S. foreign-born population of 44 million), BAJI has been on the front lines of documenting and drawing attention to U.S. policies bearing-upon black  immigration and naturalization, with an eye specifically toward racial injustices built into these processes. For example, BAJI has challenged and staged large-scale protests against the Trump Administration's cancellation of Deferred Action for Childhood Arrivals (DACA), and against incarcerations of black undocumented immigrants and asylum-seekers upon arrival at the Mexico border and within the U.S.
There has been both thematic and leadership crossover between these immigration-oriented and police reform-oriented mobilizations, as embodied for example in the high-profile leadership of Nigerian-American activist, Opal Tometi, a principal co-founder of BLM and a leader and once executive director of BAJI. Just as  BLM's initiators were a team of immigrant and U.S.-born black activists (Tometi, Patrisse Khan-Cullors, and Alicia Garza), BAJI was initiated by South African immigrant Kelvin Sauls and civil rights activist Phillip Lawson, two clergymen who mobilized San Francisco Bay Area black activists and African cultural bridge-building networks in pursuit of BAJI's objectives.
The BLM movement has swept across the nation and the world via its 15 formal U.S. and Canadian chapters and its many informal networks extending across the globe, but a major center of BLM activism since at least 2014 has been Minneapolis.
In December 2014, BLM Minnesota drew more than a thousand protesters to the Minneapolis-area's celebrated Mall of America to generate local support for justice in the August 2014 killing of 18-year old Michael Brown by a white policeman in Ferguson, Missouri. When in November 2015, Minneapolis police killed 24-year old Jamar Clark (who, like Brown in Ferguson was unarmed), BLM Minnesota protested outside a police station at the center of the storm for 18 days. BLM also staged major protests that year at Mall of America to disrupt Thanksgiving and Christmas season shopping and at the Minneapolis-St. Paul airport to disrupt Christmas season travel. Despite the attention brought locally and nationally to the Clark case, no charges were filed against the policemen responsible for Clark's death—(who reportedly was killed while lying on the ground in handcuffs).
Activists in Minneapolis, therefore, were a strategic part of BLM's growing influence long before George Floyd became a more recent case of black execution by police. One of BLM Minnesota's most prominent organizers, Miski Noor, who is part of Minneapolis' large Muslim African immigrant community, had this to say in 2017 about the importance of the Minneapolis context to global antiracism work:
"Our city has served as one of the major battlegrounds for the sanctity of Black life over the last four years . . . Like other cities in the U.S., poor and young Black women and femme activists in Minneapolis have created space over the years for people to take action, organize their communities and change the material conditions of Black folks. Their work has created a national platform for Minneapolis . . .."
George Floyd's recent killing has magnified attention on Minneapolis and amplified the influence of Minneapolis' front-line activists, including its strongly mobilized African Muslim immigrant community. The fact that George Floyd's death occurred in a neighborhood where Minneapolis' Somali community is heavily concentrated clearly contributed to the active involvement of Somalis (especially younger-generation Somalis), already highly mobilized on racial justice issues. Commenting upon recent Somali activism, Minnesota journalist Mukhtar Ibrahim reports: "The younger generation clearly came out this time. Probably they have more interactions with the police than their parents or they can relate more with the African American experience than their parents . . . I saw a lot of young Somalis participating, especially young females, wearing the hijab . . .." Many within the Somali business community also were very supportive of the protests, reportedly donating food and supplies to the protesters.
Congresswoman Ilhan Omar (D-MN), who represents this district in the U.S. Congress, has also been a high-profile representative of a politically activated Somali Muslim community, while increasingly forming strategic political alignments on race matters with African American communities. She has teamed-up legislatively with Congresswoman Ayana Pressley (D-MA) on more than one recently introduced racial justice bill, including the Student Debt Emergency Relief Act, and the National Police Misuse of Force Investigation Board Act.
These illustrations of expanded front-line racial justice activism by African immigrants display a potential (too often unfulfilled) for broadening and deepening African immigrant alliances with black racial justice undertakings.
Indeed, the glaring injustice of George Floyd's killing further galvanized broader alliances, but the fires of intercultural black protest have fed and must continue to feed off the fresh commitments to social justice being cultivated among new generations of activists, including among new generations of Africans born into immigrant households within the U.S. Lifelong socialization by U.S.-born Africans into the American racial experience increasingly makes possible their fuller appreciation of the psychic dissonances imposed by racism. Also, reevaluations of the adherence within their communities to mainstream ideas of respectability and American exceptionalism are eroding conceptual barriers to wider African defiance of prevailing American racism.
These developments bode well for efforts to more fully realize potential for intercultural Black racial justice alliances.
Share with a friend:
Posted by SENDMEYOURNEWS at 2:07 PM