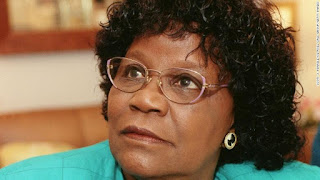 (CNN)Former Rep. Carrie Meek, who broke barriers throughout her winding political career as the daughter of a sharecropper and granddaughter of a slave, died Sunday in her Miami home. She was 95.

Her children Lucia Davis-Raiford, Sheila Davis Kinui, and retired Rep. Kendrick B. Meek of Florida provided a statement about her legacy to CNN.

It read: "Carrie Meek was our family matriarch who fulfilled this role for the entire South Florida community. She was a bridge builder and healer, a unifier with a legacy defined by selfless public service. Forever the educator, the Congresswoman taught us all lessons about justice and morality. Her approach was rooted in kindness and humility. Carrie Meek made our society stronger and more equitable — an outcome that is an everlasting tribute to our beloved mother. She was guided by her faith, always inspired by the outpouring of love and community support. We humbly ask for your prayers at this time."

Meek was born in Tallahassee, Florida in 1926, according to her congressional biography. After serving as Miami-Dade Community College's first Black professor, associate dean and assistant to the vice president, Meek beat out 12 other candidates when she ran for the Florida state House in 1978.

Meek would go on to leverage her career in state government into a successful US House campaign in 1992. Alongside former Reps. Corrine Brown and Alcee Hastings, Meek joined Congress as one of the first Black members elected since the Reconstruction Era.

For the next decade, she used her legislative perch to push a range of Democratic priorities from immigration reform to economic development. ''We see showboats and we see tugboats,'' late civil rights legend Rep. John Lewis said in 1999 of the different legislative styles in Congress. ''She's a tugboat. I never want to be on the side of issues against her.''

Meek retired in 2002 and was succeeded by her son Kendrick, who ran successfully for her House seat and held it for four terms.

Following her congressional career, Meek shifted her focus to the Carrie Meek Foundation, which worked to provide the Miami-Dade community with jobs and opportunities, according to the statement provided by Sharon. She ran the foundation's operations until 2015 when "declining health" forced her step down.

News of her death drew an immediate outpouring of support Sunday evening.

"I am deeply saddened by the passing of my predecessor Congresswoman Carrie Meek. She was a true champion for Black communities in Florida and throughout the world. She mentored me throughout my political career and was a role model for politicians... on how to navigate the jungle of racism, discrimination and equality in Florida," Wilson wrote.

She continued: "Carrie Meek was a sweet, sweet spirit that permeated our community for many years. Her presence in a room spoke volumes for generations yet unborn. My thoughts and prayers are with her family."

"My deepest condolences to the Meek family. I had the honor of overlapping in Congressional service with Carrie Meek," Democratic Rep. Gregory Meeks of New York tweeted. "At her core, she was an educator and I'm thankful for all that I learned from her."

Democratic Rep. Darren Soto of Florida similarly lauded Meek as a trailblazer, "with a big heart & much courage."

"She was a champion of civil rights, healthcare, education, jobs & housing. She protected our state thru Hurricane Andrew & base closures. We will strive to follow her amazing legacy!" he tweeted.

"Carrie was a living legend and an institution. Her passion and conviction made everyone around her love, admire, and respect her," he tweeted. "There is no doubt that Congresswoman Meek's legacy will leave a lasting imprint for generations to come."

GLOBAL INFORMATION NETWORK creates and distributes news and feature articles on current affairs in Africa to media outlets, scholars, students and activists in the U.S. and Canada. Our goal is to introduce important new voices on topics relevant to Americans, to increase the perspectives available to readers in North America and to bring into their view information about global issues that are overlooked or under-reported by mainstream media.

Posted by SENDMEYOURNEWS at 10:47 AM