The crime of "saggy pants"? 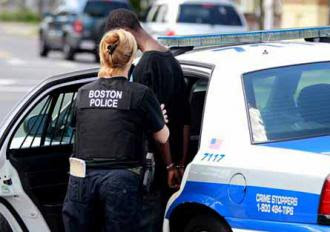 SAGGY PANTS: hip-hop fashion statement or criminal act? According to
produced by the Black Mental Health Alliance of Massachusetts (BMHAM),
wearing your jeans below your waist is a "behavioral health issue in our
neighborhoods and communities that must be addressed."


The advertisements began running in late January and feature two
young Black men walking with their pants hanging low and a Black cop
disparaging the "hip-hop style" of saggy pants. "There's something you
may not know," the cop continues. "You can be fined up to $300, be
placed in the state prison for up to three years, or be placed in the
county jail for up to two years. You still think it's cool? Pull up your
pants. Respect yourself."

BMHAM cites an archaic Massachusetts General Law as its justification
for advocating the incarceration of those who commit the "crime" of
wearing saggy pants. The law is entitled "Crimes Against Chastity,
Morality, Decency and Good Order" and states that "a man or woman,
married or unmarried, who is guilty of open and gross lewdness and
lascivious behavior, shall be punished by imprisonment in the state
prison for not more than three years or in jail for not more than two
years or by a fine of not more than $300."....CONTINUES

Posted by SENDMEYOURNEWS at 12:02 PM