ONLY ONE POSSIBLE CONCLUSION: WHITE AMERICA LIKES ITS KILLER COPS 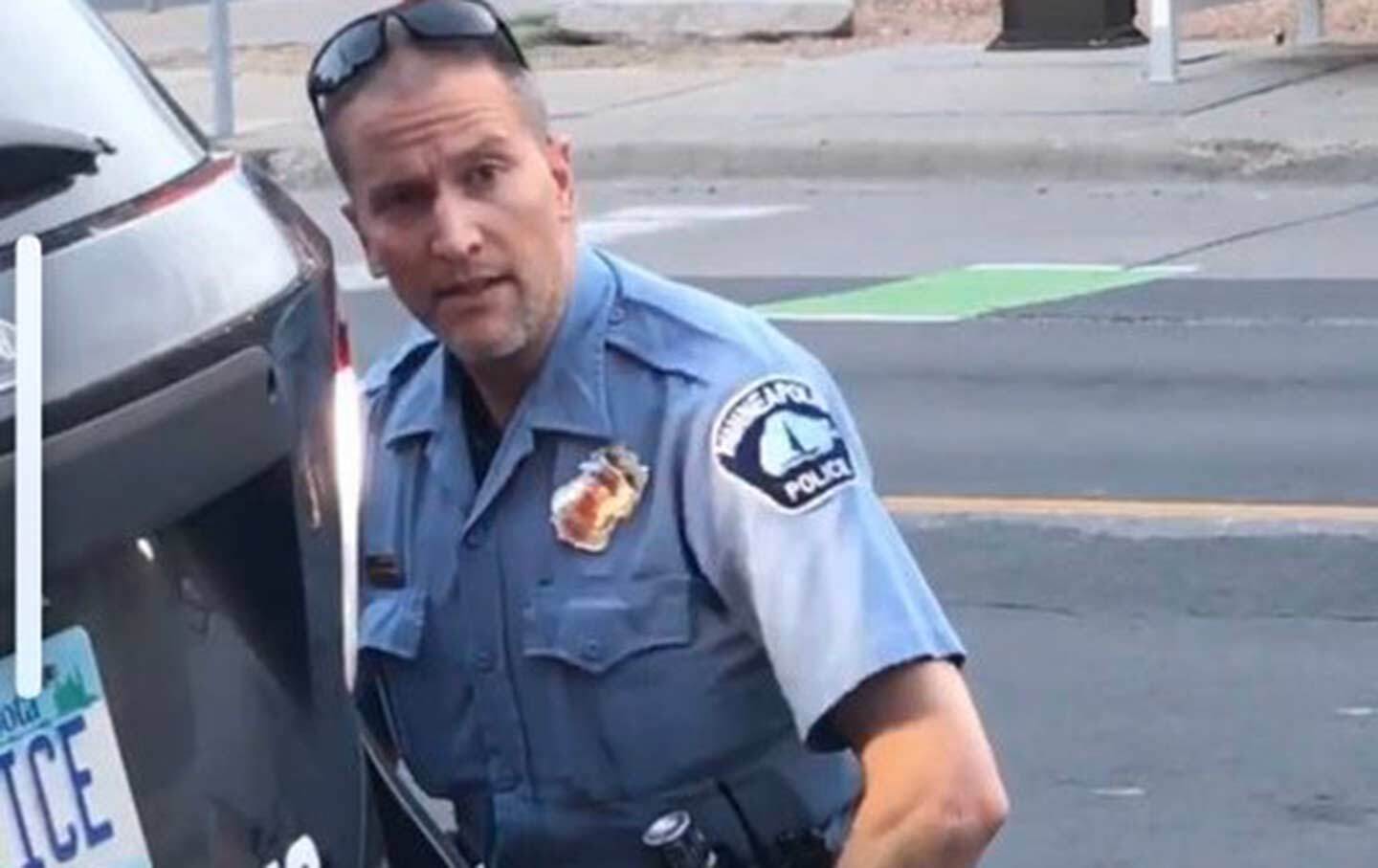 Ready To Fight Back?

Sign up for Take Action Now and get three actions in your inbox every week.

You will receive occasional promotional offers for programs that support The Nation's journalism. You can read our Privacy Policy here.
George Floyd was murdered by Minneapolis police in broad daylight this Memorial Day weekend. We know he was murdered because video shows Floyd handcuffed and pinned under the knee of an officer who was crushing his throat into the pavement. Floyd could be heard telling the officer that he couldn't breathe. He could be heard telling the officer, "Don't kill me." Onlookers were heard begging the officer to stop killing the man.
The police didn't stop. The police are never going to voluntarily stop killing black and brown people. The killings will continue until the majority of white people in this country make the killings stop.
The police work for white people, and they know it. White people know it too. Deep down, white people know exactly whom the police are supposed to "protect and serve," and they damn well know it's not black and brown people. We saw some video of that too, over the weekend. Amy Cooper was walking in Central Park with her dog. Her dog was off its leash, in violation of park rules and city ordinances. A bird-watcher, Christian Cooper, who happens to be black, asked her to follow the rules. Instead of just putting her dog on a leash, Amy decided to use Christian's race against him. She first threatened to call the cops, and then did just that, claiming that an "African American man" was "threatening" her in the park.
TOP ARTICLES1/5READ MORECONVERSATIONS WITH 'THE NATION': NAOMI KLEIN
The very instant that Amy Cooper felt she needed the support of institutionalized racism to get her through her morning, she knew exactly where to find it. She knew exactly whom to call. Amy Cooper was the one in violation of the rules. Yet there she was, calling the cops. No doubt, it wouldn't have even occurred to her to call them to the scene of her lawlessness if not for the way cops tend to harass, jail, and, yes, murder people who look like Christian Cooper. Or George Floyd. Or Eric Garner. Or Terence Crutcher. Or Alton Sterling. Or Emantic Fitzgerald Bradford Jr. Or Amadou Diallo.
When Amy Cooper threatened to call the cops, she was threatening to take a black man's life. It's a threat that only works because cops are so consistently willing to murder black and brown men. Amy Cooper was able to dial up 400 years of racial oppression and violence on her phone more easily than I am able to order a pizza.
It doesn't have to be this way. It is entirely within the scope of white power in America to rein in its police. White people could elect mayors and prosecutors who are committed to police reform. White judges and juries could hold the police accountable for their crimes. White Republicans could challenge and eventually break the power of police unions just as easily as they break teachers' unions or any labor union that stands in the way of rapacious capitalism. If a majority of white people decided, today, that racist policing should end, we'd start seeing changes to police forces by the middle of next week.

Subscribe today and Save up to $129.
But white people do not stop their cops. A majority of them clearly want the cops to behave this way. They want the viciousness. They want the horror. Why? It's not just that a majority of white America probably thinks Amy Cooper did the right thing in her specific situation; it's that they think they will one day be in a situation where Amy's actions are justified. One day they might be alone in a park around a strange black man, and what might happen then? Sure, Christian Cooper seems like a "nice" black person, but what if he weren't? What if he were a "mean" or "aggressive" black person, and you were just alone in the park, illegally walking your dog? Best to keep brutal, dangerous, and racist cops around, because, hey, you never know.
White people think they might one day be Amy Cooper and they want to have somebody to call, just in case. They know they'll never be Christian Cooper. Making a society that's safe for Christian Cooper to bird-watch while black just isn't the most important thing to a majority of white America.
Oh, a bunch of white people will be performatively outraged and saddened by Amy Cooper's behavior. They'll gladly participate in her online dragging. But when it comes to neutering the police so that the Amy Coopers of the world don't have that kind of privilege and power over the Christian Coopers of the world, most of those white people will fall silent.
By the same token, white people will participate in the outrage over specific murders, like George Floyd's murder or Breonna Taylor's. They will join in calls to bring individual racists to account, like Amy Cooper or Gregory and Travis McMichael. But when it comes time to deal with institutional purveyors of racism, as opposed to individual bad actors, the outrage and support of the white community is not there. We see that disconnect on display now as police use the coronavirus to threaten and harass black and brown people.

If you like this article, please give today to help fund The Nation's work.


The Center for Constitutional Rights, the NAACP Legal Defense Fund, and the Legal Aid Society have joined a motion asking courts to investigate the New York Police Department's enforcement of social distancing during the pandemic. The legal motion suggests that the NYPD is in violation of court orders imposed on the city because of its unconstitutional stop-and-frisk program. The lawyers are asking for an immediate moratorium on NYPD enforcement of social distancing orders.
Since March, 81 percent of social distancing violations issued by the NYPD have been made against black or Latinx people. And those stats simply confirm what our eyes are already telling us. We've all seen the pictures of white people gathered in parks as police officers politely hand out masks, but no tickets, just as we've all seen videos, shot just a neighborhood away, showing black and brown people getting beaten and manhandled by the cops for allegedly violating social distancing protocols.
Anybody could have seen this coming. In fact, I wrote about how this would happen once the NYPD was empowered to enforce social distancing. I don't have a crystal ball. I'm not a wizard. I just know that cops cannot be trusted with the power they already have—and should never be given any more. Putting the NYPD in charge of enforcing social distancing was a decision that was so obviously going to lead to racially biased enforcement of the orders that one has to assume it was intentional.
Most black people know what happens when cops are given power, but we can't get 51 percent of white people to do anything about it. We can't get New York City Mayor Bill de Blasio, who centered his first mayoral campaign on his opposition to stop-and-frisk, to take a stand against the racist actions of his police force. We can't get the white people who are willing to gather in large crowds to enjoy a spring day to gather in a large crowd to protest at City Hall.


BREONNA TAYLOR WAS MURDERED FOR SLEEPING WHILE BLACK

COVID IS ABOUT TO BECOME THE NEWEST EXCUSE FOR POLICE BRUTALITY

WE DIDN'T NEED VIDEO TO KNOW AHMAUD ARBERY WAS LYNCHED

Elie Mystal
Why would they? White people are not ignorant and they're not blind. They see the racial bias in policing, and they know that bias benefits them. They know they're not going to catch a beatdown for not wearing a mask. They know they're not going to be choked to death on the street in broad daylight. They know that having racist police officers around gives them incredible power, and power makes people feel good even if they never use it. I've been in rooms where I've heard white people congratulate themselves for not calling the cops on some black person, as if declining the option to use terrorism against a black person was some kind of proof of liberal good faith.
Black people have tried, again and again, to end the horror of police brutality against us. We march, we protest, we educate, we vote. We teach our children a special set of rules. We produce art and literature and music documenting our pain. We start organizations and movements. And yet we can't achieve structural change in policing because a majority of white America always sets its will against us. White people in our own communities, our alleged "friends and neighbors," consistently vote and act in ways that empower the police and ignore their brutality against us.
White people could put their police dogs on a leash. But they won't. And more black and brown people will get mauled and killed until white people decide to do better. More black people will die like George Floyd, because most white people want to live like Amy Cooper.

MITCH MCCONNELL IS EVEN WORSE THAN TRUMP

Elie Mystal is The Nation's justice correspondent—covering the courts, the criminal justice system, and politics—and the force behind the magazine's monthly column "Objection!" He is also an Alfred Knobler Fellow at the Type Media Center. He can be followed @ElieNYC.
Posted by SENDMEYOURNEWS at 9:59 AM